One of these things is not like the others...

Images taken from The Second Book of History, Including The Modern History of Europe, Africa, and Asia hosted at www.oldbookart.com

Who Rang It Better?


Me and assorted others at Fabrica in Brighton.

Hello Kickstarers, I would like to tell you about the latest project from Starburns Industries, one of today's most innovative animation studios. The project comes to us from one of the greatest artistic minds of our generation...Charlie Kaufman 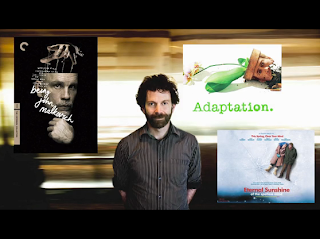 This represents the video I can't embed,
follow the Kickstarter link below to watch it for yourself.

So begins the pledge video for Anomalisa, which the internet has been getting progressively more excited about over the last 24 hours. The prospect of this crowd funded animated film is definitely appealing to many people, having raised nearly half it's proposed budget in the day since it launched the Kickstarter page, but I do wonder slightly if all of them know quite what it is they're putting so much hope (and actual money) into.

The video describes it's lead creator as:

...the cinematic genius behind such films as Being John Malcovitch, Adaptation, and Eternal Sunshine of The Spotless Mind.

And is adamant that

...we want to make Anomalisa without the interference of the typical big studio process.

But makes no mention of the last Kaufman project to have been created using such a "hands off" and "respect the pure vision of the artist" technique, Synecdoche New York. Possibly because if you're about to ask the collected online community to give you $200,000 it's probably not the best time to remind them that the last time someone gave that self same cinematic genius the freedom you're so excitedly proposing, the result was a critical mixed bag, a box office disaster*, and possibly the only film I've ever gotten truely angry at for not making sense (even Prometheus was largely followable, and had the good grace to feature a scene in which someone was essentially blow jobbed to death).

Of course this will be a rather different beast, being much much more tightly budgeted, animated and with a planned total run-time of only 40 minutes, but with all other information about the film being rather thin on the ground – the video tells us only that "Anomalisa is a film about a man crippled by the mundanity of his life" which must rival "it's about people coping with things" as an informative plot summery – anyone expecting Being John Malcovitch in half the time might find themselves slightly regretting that $25 digital pre-order when the project finally surfaces.

Well, I made a promise to myself that I would restart this blog over the next few months, partly to help myself get into the critical writing mood, and partly because I’m still rather proud of the name I came up with for this thing, and don’t want it to go to waste thanks to my own lack of activity.
The source of much of the forth-coming content is going to be animated shorts. A mix of the best, worst, and averagely passable that a combination of Vimeo, YouTube, and my recently acquired Jan Svankmajer boxed set can provide, likely with some other stuff lobbed in as and when I fancy it.
So where do se start off? Well aside from my writing and viewing plans, my other summer activity is to begin the more-exciting-than-a-weekend-with-Batman task that is researching and outlining my dissertation topic: late 19th Century illustrator Aubrey Beardsley (the topic was chosen willingly of course, I’m just terribly adverse to the academic research bit).

So guess what I then randomly stumbled upon an animated short about? 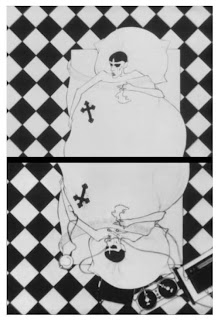 Produced by a minuscule team and a little bit of Arts Council funding in Hammersmith in 1981 After Beardsley is a curiosity of a film; partly a reverential look at the artist’s work and lasting influence, partly a critical look at the late 20th century cultural and political landscape.

The opening sequence of the short is really more of a reader for the uninitiated viewer, there is a very brief history, before a 3 and-a-half minute slide show of all of the images which will be referenced in the course of the animation itself. Understandable why it’s there, though I would have put the illustration slides on the end, rather than the beginning, but I’m just nit picking, so we’ll move onto the main show.

The film kicks in proper with a very impressive animated transition from the famous “gargoyle” photograph, into a variation on the Salome illustration The Dancer's Reward. (3:20 on the videos below) Leading to the title, and a synopsis of the film itself. The YouTube quality makes this a tad squinty to read, but the film does a good enough job of relaying it’s own narrative without it.

I’ll avoid getting into a point by point of the film from here on, the actual runtime of the animation (without the opening, and credits) is probably only about 8 minutes in total, but to be brief; the plot leads us (metaphorically) and Beardsley (less so) on a brisk walk from his death in 1898, though the history of the 20th century – using the evolution of transport as a neat shorthand for this passage of time. On reaching the current era the pace slows, and we are taken through a series of vignettes based on Beardsley illustrations, their imagery retooled with modern urban vistas (specifically New York) and faces. 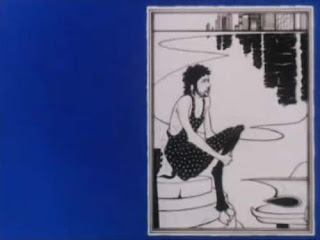 It ends with what I can only really describe as a somewhat melodramatic climax, which I’ll leave you to view for yourself if you’re interested. But it’s definitely worth a look, the animation is minimal but very smooth, and many of the pastiche drawings are seamlessly executed.

The Towner Gallery, Part Two (Only three months late, because I suck).

I should start by apologising, you will undoubtedly have noticed I have not been on holiday for three whole months, partly because I have written another blog post since then, and also because my blog readership is still very much in the “people that know me directly” stage.

I’d like to pick up directly where I left off, but unfortunately so much time has passed since my visit, that looking at my own notes now is like trying to read French (or if you can speak French, some other language). So this might not be exactly the most clear and comprehensive of reviews.

Towner, in its current incarnation, is a young gallery, having only opened in 2009, so is still very much trying to carve out it’s own identity, a challenge which must be made all the more difficult by the galleries Tate connections. 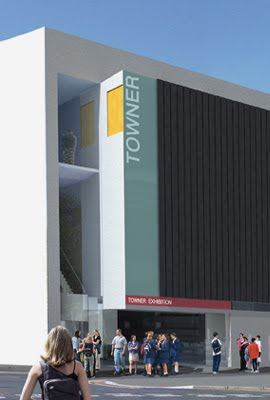 They’ve let them use the font and everything.

The collection I saw (which ended in March) attempted to marry its local and national links, containing a mix of mid 20th century artists based along the Sussex coast, and high profile established contemporary artists such as Grayson Perry and Tracy Emin, only to came across as rather disjointed. The low light of the exhibition for me however was a more simple error in curation, the placement of a large, text heavy, and diagrammatic Grayson Perry etching “Map of Nowhere” just outside a video piece with a loud accompanying soundtrack. Not a problem for (and presumably installed by) anyone who is capable of reading in a noisy environment, but not being one of those people myself, this seemed the least suitable of all the works on display to hang in such a distraction riddled spot. 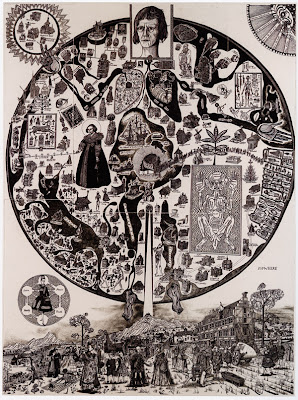 Click for big, but turn the radio on first.

That’s all for the review, but the snippets I can still remember after the last three months are nonetheless useful; my most strongly retained memory of the main collection is not of a new and interesting work or a revealing insight, but of an error. No exhibition will ever be perfect, but it must leave the viewer with something that clings in the mind, everything average will be forgotten in time, it’s the extremes that linger, and at such a young age, it’s vital that The Tower aim for as many of those positive extremes as possible as it finds its feet, if it is to establish itself as firmly as it’s parent galleries in London.

To Mohammed Al Fyed, for finally making me appreciate the understated and subtel work of Jeff Koons.

Say what you will about Koons' Michael Jackson and Bubbles, but it wasn't a piece of public sculpture, was in a reasonably good pose, and most importantly, was made from the fairly sound material of porcelain, rather than being carved directly from the nightmares of children. 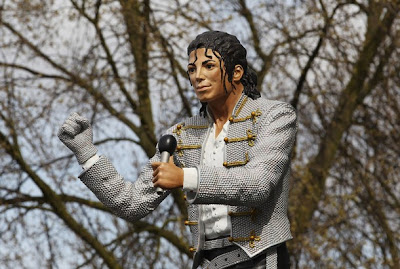 seriously, this thing is fucking scary.

So thank you Mo, for opening my horizons, warping my mind, and providing a much needed boost to all of Fulhams suppliers of dispoable bedsheets and night lights. 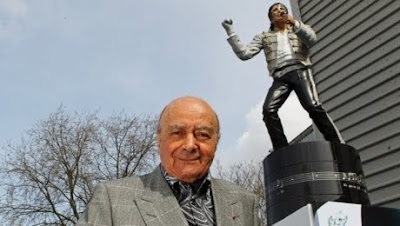 Tomoaki Suzuki and The Towner Gallery (A review in two parts, because it’s about two things)

Even having been warned before hand that the sculptures on display were going to be much much smaller than the scale free poster suggested, it was still a shock on entering the exhibition to see the floor dotted with such tiny standing figures. Each one untitled, unelevated, seemingly unsupported (but actually held in place underneath by “gallery wax”*) and most surprisingly unfenced. The diminutive characters mill casually amongst the gallery attendees, presented equally as people in themselves rather than separated off as “the artwork”.

One of the effects of this less than usual display method is it forces the viewer to crouch in order to properly see each piece, creating a greater level of engagement than simply gazing at something which had been bought up to your eye level - again something which adds to characterisation of the figures, making them appear as more than just inanimate representations.

The craftsmanship of the sculptures is amazing, single blocks of lime wood carved into flowing hair, limply dangling cigarettes and open bags filled with page-marked books. I would disagree with Towner themselves as to it being this element alone which creates the lifelike feeling of the work, and argue rather that this exhibition is very much the sum of all its parts; the pieces and display working in perfect tandem with each other to create a single effect.

If there is any problem with Suzuki’s work however, it is the rather limiting nature of his choice of theme. Taking his characters from the “fashion and youth culture” of the area around his Hackney studio, does give you the feeling whilst wondering amongst the works, that you are crashing the worlds tiniest hipster party. 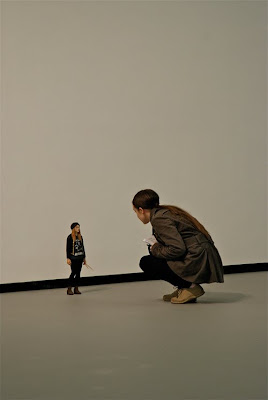 Your humble writer, in conversation with a work by Tomoaki Suzuki.

All in all though the exhibition is a triumph of both artistry and curation, I just hope that Suzuki eventually casts his keen eye over the far less fashionable masses which make up the rest of the world.

Come back soon for the thrilling second half; a general review of The Towner Gallery. In the mean time, I am off on holiday, toodleoo everyone!

ACG
ACG is a full-time Illustration student, part-time gallery volunteer, and occasional writer on the only topic they could claim to have anything resembling an expertise in. Resembling being the key word. E-mail me: Procrastinationathon@gmail.com